From Charles to Cam

Over the summer I crossed the Atlantic, from new Cambridge to old Cambridge, where I am fortunate to be spending the Fall semester as a “visiting fellow” at the Isaac Newton Institute (INI). The INI “runs research programmes on selected themes in mathematics and the mathematical sciences”, and I am participating in the semester-long “Mathematical Challenges in Quantum Information” programme organized by Richard Jozsa, Noah Linden, Peter Shor and Andreas Winter. The INI typically runs two programmes simultaneously: when we started out, we shared the institute’s beautiful space with a group of researchers on the dynamics of infectious diseases; after that it was with physicists studying the holographic principle, soon to be replaced by participants in the “Mathematics for the fluid earth” programme — a wide range of programmes on mathematics and its applications.

Both Cambridge are similar in at least two respects: first, much of their respective life and blood flows from from the large student body attending their universities, in both cases among the oldest in the nation (Oxford beats Cambridge by some measly 40 years, and Harvard’s status as the oldest in the US is only mildly disputed). Second, both cities are traversed by beautiful rivers (though the one much larger than the other) on which the aforementioned student bodies spend an inordinate amount of time engaged in the strangest nautical activities, in which they seem to place much pride. Punting, anyone?

In fact the demographics are remarkably similar: Cambridge, UK has about 19000 students, or

of its total population; Cambridge, MA has roughly 35000 students, accounting for 28% of its size. In spite of being of roughly the same size, the English town feels much smaller. Paradoxically this may partly be due to it being more spread out, which is more conducive to a “small town” feeling; of course Cambridge, MA is surrounded by Boston and its suburbs, while Cambridge, UK is right in the middle of…well, not much… Although London is not far (45 minutes by train), this relative geographic isolation, combined with the particular structure of the university, does give the overall sensation of being in a much more secluded world than that of the Harvard and MIT of the other Cambridge. Students here spend much of their time inside the many gated colleges that are the heart of the university and which offer them room, board, tutoring, and more. Most of the colleges are pristine, with five-century old Gothic cathedral-like buildings surrounded by impeccably tended lawns. (Harvard can give that feeling a little as well, but it has much more modern-looking buildings than Cambridge University; also the population on campus, discounting the busloads of tourists that it shares with Cambridge University, seems much more diverse — though I don’t have any statistics to back this up).

View from my living room…

This is my first academic visit to Cambridge (my first time here was some 15 years ago already, for a summer job at a company situated barely a quarter of a mile from where the INI is housing me), and the INI is the perfect place to be spending it. Although it predates it by about a decade, the institute is located on the same site as Cambridge University’s Centre for Mathematical Sciences (CMS), home to the university’s Faculty of Mathematics. Apparently the INI was originally built “far” to the West of Cambridge, in a secluded location appropriate for the hermit life-style well-known to be the abode of great mathematicians. In fact, residents around the INI apparently secured the obligation for INI to turn off its lights after a certain time at night, so as not to pollute their own tranquility! When it was decided to build the larger CMS at the same location, some protested that this tranquility would forever be lost… Well, I am happy to report that, although Cambridge University’s West Cambridge site is fast expanding, tranquility is never too far (who said too close?): see the picture for a view from my apartment, a ten minutes walk from INI. In fact, Cambridge’s many footpaths, which crisscross the city as well as the surrounding countryside and villages, are a delight to explore and get lost in — a lot of morning runs in perspective!

The institute is a small and cozy place. It is built on two floors. The ground floor hosts the main seminar room, which can accommodate about 100 people, the small library, the registration desk and a few couches and blackboards. The first floor, which opens up on the ground floor around the revolving staircase that leads to it (this is important so that the sound of the bell announcing the beginning of talks is heard throughout), contains the offices — two dozen or so — arranged around the all-important coffee machine, as well as abundant couches and blackboards. The space has just the right combination of chaos and order: chaos, in that there are many acute angles, half-levels and backboards in the strangest places, but also order, in that the coffee machine and supply of chocolate and other delicate biscuits never runs out. I would estimate that our programme has about 20 participants present at any given time, which makes for a lively and cohesive crowd. Morning coffee it served at 11, lunch is taken at the nearby colleges — the debate rages on as to which is better — worst? — and afternoon tea is ready at 3pm. People come and go but the blackboards never waste much time empty of the hopeful scribbles left by the enthusiastic crowd of computer scientists, mathematicians, and physicists alike. 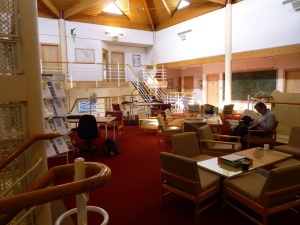 This semester’s programme is structured around three week-long workshops. The first, on “New Mathematical Directions for Quantum Information” and organized by Ashley Montanaro, Noah Linden and Andreas Winter, took place in early September. The workshop was successful in introducing the participants to the themes and mathematical tools around which the semester is structured, including the application of techniques from information theory, functional analysis, random matrix theory, complexity theory and more to problems in quantum information and quantum computing such as the study of quantum channel capacities, quantum algorithms, quantum multiplayer games. All talks at the INI are recorded, and you can view those from the workshop by navigating through the workshop’s online programme. For those not yet familiar with the topics I recommend Graeme Mitchinson’s introduction to de Finetti theorems, Fernando Brandao’s two lectures on information-theoretic techniques in quantum many-body physics, Ion Nechita’s lectures on random matrix theory and Stanislaw Szarek’s tutorial on measure concentration. (Incidentally, if you complement those with Jon Keating’s lecture on random matrix theory, you get quite a good introduction to the distinctive British, French and Brazilian styles of teaching!)

The second workshop, soberly (jokingly?) entitled “Quantum Marginals” and organized by Matthias Christandl, Michael Walter and Andreas Winter, is running this week. Although the workshop is still ongoing (and I will unfortunately have to miss the last day), I found it quite instructive; although I was familiar with the basic statement of the quantum marginal problem I hadn’t appreciated how rich the problem was, and this week’s many talks gave a good sample of the many different angles under which it can be approached, using a wide array of techniques. So, what are quantum marginals about? Wait till the next post…(You can already watch the nice introductory talk by Michael Walter for a teaser.)

I am a professor in the department of Computing and Mathematical Sciences (CMS) at the California Institute of Technology, where I am also a member of the Institute for Quantum Information and Matter (IQIM). My research is in quantum complexity theory and cryptography.
View all posts by Thomas →
This entry was posted in Conferences, Tourism and tagged Cambridge, Newton institute, Workshop. Bookmark the permalink.