I guess it wasn’t that bad…

Each semester the newly-founded Simons Institute, hosted on the UC Berkeley campus, simultaneously hosts two thematic programs. The first two programs, which took place in the Fall, were onTheoretical Foundations of Big Data Analysis and Real Analysis in Computer Science. This Spring two new programs just got started, on Quantum Hamiltonian Complexity and Evolutionary Biology and the Theory of Computing (I’ll let you guess which one I’m participating in!)

You’ll notice that both programs are strictly in line with the Institute’s stated goal of “expand[ing] the horizons of [computer science] by exploring other scientific disciplines through a computational lens”. But there is a subtle difference in their titles, which was partially reflected in their respective “boot camps”, or introductory workshops, held over the past couple weeks. While the quantum program has a self-assuming title, the other program’s resonates closer to an explicitly forced conjunction, “biology and computing”. Hamiltonian complexity is a fast maturing field, initiated in great part by Alexei Kitaev in the early 2000s. “Computational evolutionary theory”, in contrast, is a field in wanting. One of the goals of the program on evolution will likely be to set the foundations, and perhaps more importantly the expectations, for this field; laying out its ground questions. (Or, as Christos put it in answer to a question about which open problems he would conceivably think could be solved during the semester, perhaps the program’s most ambitious goal is simply to “forge life-long ties”.)

If one is to judge by the talks given in the boot camp this is likely to be an exciting but challenging task. The idea for these boot camps is to bring all participants “on the same page”. I won’t comment much on the QHC bootcamp, although I’d like to come back to it in a separate post in which I will elaborate a little on a talk I gave about hardness results for quantum multiplayer games. For now I just want to point to the talk given by Christos Papadimitriou in the Evolutionary Biology boot camp. I highly recommend watching both hour-long talks, including (especially) the Q&A that took place throughout, and at the end, of each of the talks. I always enjoy the density of Christos’ talks: on the surface they may appear quite light, and the material covered bounded. But Christos always manages to raise an impressive number of key conceptual (and often controversial!) issues using few but well-chosen words.

About 27 minutes into his first talk Christos raises the following question: if protein folding is an NP-hard problem (as it is in general), then how come proteins fold by themselves? 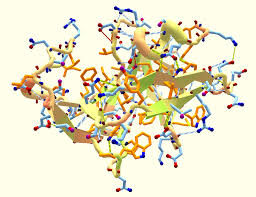 Apparently this is known as Levinthal’s paradox and has been discussed since the late 60s. The reason I am bringing it up here is the question sounds oddly familiar. It is the same question that was discussed at length in the QHC bootcamp, and also on this blog: if finding ground states of local Hamiltonians is a QMA-hard problem, then how can physical systems ever reach equilibrium? Is nature solving a QMA-hard problem? If so, how?

It was interesting to see how the same fundamental question on the physical bearing of results in computational complexity arose in both programs. The audience in Christos’ talk immediately raised some of the same objections that are often discussed regarding the QMA-hardness of the local Hamiltonian problem (and the possible physical bearings of the quantum PCP conjecture), and more:

There are nuch more, and once again I encourage you to watch & enjoy the talk.

I am a professor in the department of Computing and Mathematical Sciences (CMS) at the California Institute of Technology, where I am also a member of the Institute for Quantum Information and Matter (IQIM). My research is in quantum complexity theory and cryptography.
View all posts by Thomas →
This entry was posted in Conferences, Simons and tagged boot camp, Hamiltonian complexity, quantum PCP, simons institute. Bookmark the permalink.