The nature of randomness and fundamental physical limits of secrecy 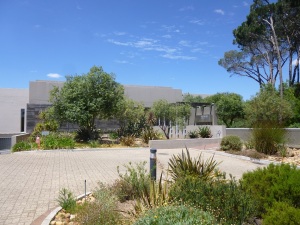 The entrance to STIAS

I spent the past five weeks at the Stellenbosch Institute for Advanced Study (STIAS), a research institute located in beautiful Stellenbosch, 40km North-West of Cape Town. I was participating in a program (“program” may be an ambitious term for a five-participant endeavour — let’s call it a “project” instead), a project then, organized around the theme of The nature of randomness and fundamental physical limits of secrecy. The project was initiated by Artur Ekert, who formulated its theme and secured the support of STIAS. It was a great experience, and I’d like to write a few posts about it. To set the stage I’ll get us started by writing a few things about Stellenbosch and STIAS. The following posts will be more scientifically focused; in particular I’ll try to cover some of the stimulating talks that we were lucky to hear as part of a three-day workshop that was held a couple weeks ago and formed the organ point of the prorgram — no, the project.

STIAS is a very interesting place. It is a small research institute nested within the large and airy campus of Stellenbosch University, known locally as “Maties” (don’t ask), one of the best universities in Africa. The spirit of STIAS is comparable to that of the IAS in Princeton, although it is far smaller: there is a single two-floor building in which I counted 22 offices; as far as I know aside from the director and administrative staff there is no permanent member. The scientific thrust of the institute is provided by its “fellows”, who typically spend a ~4-month period there (our project was thus shorter than average). Fellows are simply individuals who spend some research time at the institute, either on leave from their own institute or as part of a research project carried out with local collaborators. Concretely the institute provides office space, administrative support, and a stipend to cover local expenses. Much beyond this however STIAS provides a wonderful, relaxed and supportive environment in which to carry out research; a place which could easily top anyone’s list for best location to carry out a sabbatical leave.

Concretely, STIAS has two main attractions. The first is the local fauna — the STIAS fellows. During my stay among us could be found two philosophers, two biologists, a writer, two sociologists and three historians; not to mention the small group of eccentric physicists who insisted on dragging a whiteboard back and forth between the coffee machine, the sofas and the patio. The second attraction are the lunches. The institute staff cultivates its own little garden and prepares wonderful quiches, pies, salads, and, obviously, cakes, panna cotta, mousses and other culinary treats daily. Bring the two together and you end up with a unique epicurean experience, with the group of fellows gathering every day around a leisurely but stimulating lunch fuelled as much by the delicious food as by t
he wide-ranging conversation. (Note how the recipe closely parallels, for all I can tell, that of the IAS. Admittedly STIAS doesn’t have the cookies — but it does
offer an extensive wine & cheese reception following the “fellow’s seminar” held every
Thursday).

To set a broader stage, it may be worth mentioning that, as I am sure its director Hendrik Dreyer would not contradict, the culture of STIAS is not unaffected by Stellenbosch’s status as the heart of South African wineland. Indeed the surrounding hills are planted with the second oldest (1679!) vines of South Africa, right after the nearby Constantia and home of the famous pinotage variety of grapes, a cross-product of Pinot and Hermitage which brings out wines of a spirit that could be compared to the best frmo Burgundy. The city itself is rather quaint, populated by a mix of locals, tourists and students. The latter ensure the presence of a healthy coffee culture — and here I cannot help but mention the blue crane and butterfly, purveyor of my daily morning cortado and a highlight of my stay here. The surrounding landscape, dominated by beautiful mountains culminating in wide plateaus, is filled with wineries competing for the best view, lunch spot, and of course, wine tasting. Having been wine-educated in the best snobbish French tradition I was truly impressed by the quality of local wines; most of those I tried were quite balanced and subtle. Moreover, they are enjoyed as wine should: without pretension, and with good food and company! A pleasure that is not limited by the very affordable prices, with the good bottles being priced similarly to the daily liter of red in France, Italy or Spain, well under 10 euro. (I do realize that the notion of “affordable” is a complicated one here, South Africa being one of the countries in the world with the highest income inequality. At a political level our stay was dominated by intense student protests across South African universities in reaction to a sudden hike in registration fees decided by the government, which eventually had to back down.)

But enough tourism, let’s get to the science. In the next post we’ll start exploring “The nature of randomness and fundamental physical limits of secrecy”!

I am a professor in the department of Computing and Mathematical Sciences (CMS) at the California Institute of Technology, where I am also a member of the Institute for Quantum Information and Matter (IQIM). My research is in quantum complexity theory and cryptography.
View all posts by Thomas →
This entry was posted in Conferences, Quantum and tagged randomness, stias, Workshop. Bookmark the permalink.